With my memory jogged by the email reminder sent by MoonPigeon or FunkyPig or whatever it’s called, a booking was made at the Southcote Beefeater a week before Valentine’s Day for a table for two (obviously it was just for two – we’re not weird or anything). The option for the Valentine’s menu was selected online and we booked in for a reasonably sound eating time of 7pm.

It got to 6.30pm on the night and I suggested that we go to the restaurant early to see if the table was free. We walked there as it’s close by and both of us agreed that we wanted to drink copiously. It’s important to have shared goals in a relationship, after all.

We were met by the very friendly matriarch of the waitresses and were told ‘no, you’ll have to wait.’ Drinks were then ordered from the bar and we located ourselves in the no man’s land between the cold air-exposed tables near the main door and a lounge area of tobacco-infused regulars.

The tables we sat at were conveniently located right next to the toilets so footfall was heavy, which might explain the complex pattern of damp stains on the carpet. For added discomfort, the tables were sticky to the touch and the fabric, non-wipe clean seats felt as though they had recently been occupied by an elderly person with double incontinence.

We didn’t have long to wait, though. We soon heard an encouraging “Oi, yer table’s ready!” aimed in our general direction.

We were both given the Valentine’s Day menu but by this point the missus could think of nothing else but getting a huge rack. I was hesitant about this as I figured it might require an expensive visit to a clinic in Wokingham. After the confusion had been ironed out, we discovered with disappointment that the rack wasn’t on the V-Day Menu so we both settled for steaks cooked medium rare.

Our server, Miroslav, was very good. He was polite, courteous and attentive. For starters we opted for the damp breaded garlic mushrooms that are so ubiquitous in these sorts of places. We also ordered some battered butter chicken goujons, which are basically chicken breasts that have been attacked with a blunt apple corer and shaped into an even less attractive Twiglet. Both of these entrées were tasty enough and perfectly agreeable with the watery dips provided.

Lashings of cider and IPA were consumed during the short wait between breadcrumbs and steaks. When the mains did arrive, they came – as you can imagine – with a choice of potato twigs or potato bricks. The side vegetation was not memorable, although it was probably something floppy and green.

Both steaks were on the rawer side of medium rare and were succulent and tasty with only a moderate flow of blood and the faintest of heartbeats.

By now we were sufficiently bloated but I convinced my Valentine that she wanted a slice of chocolate fudge cake placed upon swirls of congealed chocolate welded to a plate. Despite its appearance, the pud was very nice and even better, the missus was now fully stuffed.

Our table was situated just opposite the ‘restaurant end’ toilets so we were frequently entertained with the comings and goings of the men’s conveniences. As she got stuck into her meat, the missus also got an eyeful of gents parking their own sausages upon leaving the boys’ room. It was incredibly romantic.

We were both glad that we weren’t located on the table immediately adjacent to the lav doors, as it was frequently splashed with water as punters rang their hands out post-bog visit.

The other ‘alf wanted to give our server a tip, so we left him five big ones to boost his wage packet. What heroes we are.

What they sell: MEAT, MEAT, MEAT, a few chips and a bit of lettuce. But mainly MEAT. Here’s the menu.

Vegetarian options: There’s the lettuce. And maybe some grilled fish for fake vegetarians (although who buys fish at Beefeater?).

In their own bullshit: ‘Beefeater’s been on an exciting journey since opening our first site in 1974’. The use of the word ‘site’ there makes it sound a bit like a housing development in Fords Farm, doesn’t it?

‘Restaurant’ ‘Decor’: The restaurant’s decorative centrepiece is a large cow-shaped piece of wood painted in various colours, all labelled up, informing the customer which part of some poor bovine bastard it is they’re currently chewing on. It stands out from the rest of the dark wood-panelling effect that gives off a slight feeling that you’re on board the HMS Victory.

What we ordered: The wife wanted the rack but opted for the 8oz steak instead. I decided to get one over her and went 2oz bigger.

Price: £60 which the wife paid for using her stolen Amex card.

What we got? We both got what we ordered, although they were both slightly rarer than expected.

Number of mistakes to order: NONE.

The Taste: It’s rare the wife gets served such a large portion of meat on Valentine’s Day, so she was pleasantly surprised. The steaks went down a treat too. The pud was rich, although the sticky toffee needed to be dissolved from the roofs (rooves?) of our mouths with the help of another round of boozes.

Clientele: Local elderly people, residents of Southcote and Coley and contractors from The Parkside Hotel who may have already had an unpleasant experience from the kitchen there.

Time taken from ordering to leaving: About an hour. Our server was A GOOD BLOKE.

Digestive impact: There was some slight bloating and constipation for me for the following 24 hours, as you might expect from eating a heavy mixture of batter, brown meat and dark chocolate.

Recent TripAdvisor reviews:
‘One of Reading’s gems – The food here is well above average. Surprisingly good in fact and reasonably priced. Friendly service too.’ (Malkimalk 1952)

‘A great place to feed hungry “animals” – The animals in question are two of our grandchildren. From their point of view Beefeater restaurants tick all the boxes. A shared plate of potato skins followed by a gammon steak and they are replete. Grandparents always find something they like so everyone is happy.’ (288Eurotravels)

‘Great family venue – 22 of us for a Birthday Lunch. Paul our host was amazing – everyone enjoyed it. Lovely food great venue 😊😊’ (Bakuthecat)

‘Some where to sit when locked out – Scottish bar man, more interested in serving the locals, Used to be a local here many years ago when Gino was the landlord,in the 80’s, Bar staff then first come first served not any more. May need to lift him off the floor with one hand, as happen to Gino after trying to hit my mate. Problem sorted. Are well not my local any more. Not my problem.’ (andrew j) 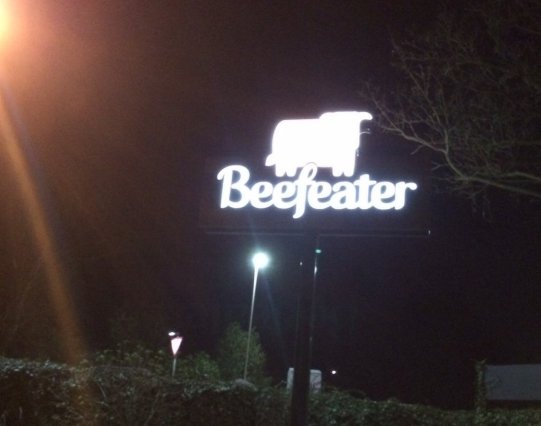